An estimated ten percent of all Americans suffer from some form of depression during their lives. This figure varies but is pretty much the same worldwide. There are a few areas of the world that depression seems to have missed, but not many. Depression in general affects the way we behave from our sleeping patterns up to the way we think and live life. 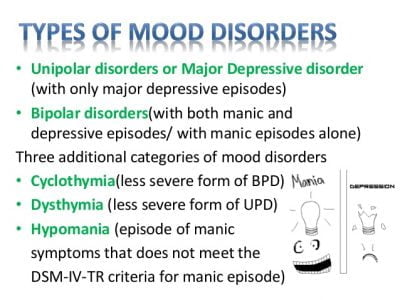 While those suffering clinical depression are at risk of using drugs or alcohol to alleviate their symptoms, the risk is greater in those with bipolar depression. A person who knows the highs of mania may try to recreate the feeling when they are depressed or “stable”. Drugs often help create that high for a short time. This puts the person at risk of adding drug addiction to the bipolar disorder.Treatment of the two types of depression also varies. Those suffering from clinical depression are prescribed anti-depressants alone. Those with bipolar depression, however, are often given a mood stabilizer first, and an antidepressant as a second choice if needed. Both medications adjust the brain chemicals to alleviate the depression, but the mood stabilizer also helps the person keep from going too far in the other direction and becoming manic.

General
Tips On Lifestyle Changes To Help With Depression
Anxiety is a typical medical condition. There are numerous treatment...